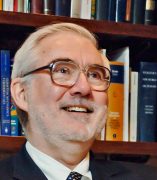 I am interested in a number of theoretical projects in the area of chemical dynamics. Most of these involve chemical reactions that take place on more than one electronic potential energy surface. One of these is the three-body fragmentation of the molecular ion Na3+ following excitation by a fast He atom. The two-step process is

Reaction cross sections as a function of J for F+HD(v = 0,J) and F+h2(v = 0,J) at E=2 kcal/mol. For F+HD the FD(FH) products are denoted by open triangles (open circles). The cross sections for F+h2 have been divided by 2 and are shown as closed circles. The 68% confidence limits are shown at selected J values.