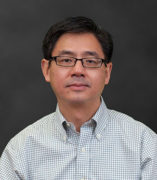 Bioengineering with a courtesy appointment in Chemistry

How protein structure determines protein function is a fundamental problem in molecular biology. We study the geometry, shape, physicochemical texture of binding surfaces to understand how they work and how functional roles of proteins can be predicted. We have built a protein surface library of >2 million surfaces for most structures in the Protein Data Bank, which provide analytical measurement of volume and area of surface pockets and interior voids of proteins. By assessing similarity in binding pocket residues, shape, and orientation, we have developed a method to discover functional relationship between similar binding surfaces. This method can uncovered novel examples of related protein functions on protein structures of different fold or different class. In collaboration with Dr. Andrej Jochimiak, this method has been applied to infer functions of protein structures solved from the structural genomics project.

We are also studying the relationship of binding surface mutation, residue conservation, and their relationship with disease causing single nucleotide polymorphism (SNP analysis). Our work showed that nonsynonymous SNPs have important structural characteristics that can be associated with those SNPs that affect the phenotype of affected individuals.

In protein design, one seeks to identify amino acid sequences that are compatible to a desired structural template but are incompatible with any other structural template. A key ingredient for the success in protein design is to develop an effective scoring function to discriminate good sequences from incompatible sequences and sequences that do not fold. We have developed a theoretical framework of designing optimal nonlinear scoring function in the form of Gaussian mixtures that can identify >200 native nonhomologous proteins simultaneously from >3million sequences-structure decoys.

A promising strategy in developing therapeutics against disease is to design protein-like peptide drugs that can interfere with undesired protein-protein interactions. An effective strategy is to screening combinatorial library of peptides displayed on phages. However, once the length of the peptide goes beyond 7 residues, it is difficult to exhaustively search for all possible sequences. We have developed a weighted method that can introduce beneficial bias in the sequences of designed phage library. We have also developed a universal codon schema that helps to enrich active peptides in constructing a phage library by 1000-fold.

Membrane proteins are an important class of proteins where structural information is relatively sparse compared to soluble proteins. We have characterized various physicochemical properties of residues in transmembrane helices, including propensity for lipid interactions (join work with Dr. DeGrado and colleagues), propensity for interstrand interactions, and propensity for higher order interactions. Our work also showed that almost all TM helices contain hydrogen bond, and spatial motifs such as serine zipper and polar clamps we discovered play important roles in TM helix assembly.

Tight packing has been thought as an important properties of native protein structures. We have developed methods for quantitative characterization of protein pakcing. We identified specific scaling relationship of protein packing and protein chain length, and showed that such a scaling relationship is due to generic properties of compact chain polymers rather than evolution. This conclusion was drawn with the state-of-the-art sequential Monte Carlo sampling method. Using this sampling method, we have developed simple lattice models to study the critical effects of chirality and side chain inflexibility in reducing the entropy of protein folding. We are developing simplified protein models combining both local sequence and contact propensity for protein structure predictions.

Evolution of protein structure and folding