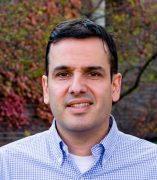 Our group is generally interested in the physical and inorganic chemistry of materials, with emphasis on redox and transport properties.  We aim to provide chemistry solutions to technological problems in energy applications, with current focus on electrochemical energy storage, which is critical in the development of a green economy based on renewable sources.  Our group combines approaches from classical solid state chemistry with nanoscience, with the goal of contributing to a unified field, where, for instance, synthesis of complex new compounds can rapidly be transitioned to their nano/mesoscale tailoring.

Our interests in inorganic chemistry lie in significantly improving our ability to synthesize compositionally and morphologically complex, stable, functional materials.  One of our current thrusts involves increasing the applicability of colloidal synthesis of nanocrystals to high levels of chemical complexity.  The second thrust focuses on the solid state chemistry of mixed anion compounds.  It involves extending existing knowledge into new chemical spaces, with the general principle of synergistically tailoring chemical bonding and physical properties.  The presence of secondary anions can introduce crystal structural disorder that favors ion diffusion, as well as stabilize transition metals in high formal oxidation states.  These thrusts will allow us to explore the boundaries of ionic conduction, redox and intercalation chemistry of solids, as well as the limits of electrochemical energy storage.

Our interests in physical chemistry center on defining the chemical pathways of redox phase transformations in solids.  We are interested in phenomena that occur at multiple length scales, from atomic to macroscopic, or, in other words, from single crystals to particle assemblies.  For this purpose, we strongly rely on X-ray-based tools, particularly those accessible at synchrotron facilities such as the Advanced Photon Source, at Argonne National Laboratory.  We have demonstrated a variety of methodologies of chemical imaging at several spatial resolutions, both in 2D and 3D (see figure), and currently push to break the technical boundaries to be able to image increasingly small single crystals during the transformation.

The figure to the left provides an example of the insight that can be gained by operando full field transmission X-ray microscopy coupled with X-ray absorption spectroscopy at the near edge structure (FF TXM-XANES). It demonstrates the existence of non-equilibrium pathways of electrochemical reaction in a battery electrode particle. The three images in (a) show a crystal of an electroactive oxide at a particular state during the battery reaction, together with maps indicating the concentrations of each phases that forms. The scheme in (b) shows how the particle was located during the reaction, showing it was only connected to the electrical circuit at one discrete point. The green arrows indicate the path of the X-ray beam, which results in the transmitted image. The scheme in (c) represents the chemical consequences of this discrete connection, showing the resulting flow of charge during the electrochemical reaction. In parts where contact does not exist, electron flow must proceed through the oxide phase, leading to the nonequilibrium pathways of transformation in (a). For further details see: Y.-S. Yu, J. Cabana et al. Adv. Energy Mater. 2015, 5, 1402040.