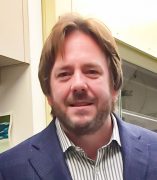 My research group studies how energy flows through semiconductors by synthesizing new types of quantum dots (QDs). We are interested in (1) creating systems to control the flow of energy through materials by synthetic design, (2) bandgap engineering of doped semiconductors, and (3) developing novel methods for studying semiconductor quantum dots with X-ray analyses.

Semiconductor QDs are a unique form of matter, which have a size dependent absorption and emission spectra. As a consequence, the electronic structure follows the quantum "particle-in-a-box" principal- only certain distinct electronic states can be occupied as dictated by the finite size of the crystal. Strongly confined QDs have atomic like density of states and size dependent bandgaps. Further, the crystallinity and organic surface passivation of semiconducting QDs result in very efficient emission quantum yields compared to the bulk materials. The emission wavelength can be tuned not only with size, but composition and structure as well.

We film the synthesis of these materials and post them to our account on Youtube, such that our methods can be reproduced by a wide range of researchers.

Our group has developed a new way to synthesize doped semiconductors where every nanoparticle contains the same number of dopants (ACS Nano, 2013). We have followed up on this work by studying how dopant electronic states are coupled to the quantum dot band structure. We study these systems using the X-ray facilities at the Advanced Photon Source and using DFT calculations on UIC's supercomputer cluster. Shown here is a representation of a hole localizing on a copper dopant in a photoexcited CdS quantum dot.

We have developed methods for creating conjugated chromophores- in essence we conjugate organic molecules to the surfaces of quantum dots which results in efficient Forster Resonant Energy Transfer (FRET) between the photoexcited QD and the dye. In the course of this work we discovered that we could modulate the efficiency of energy transfer when we coupled a dye which has environmentally sensitive absorption spectra. The result is a naturally self-referencing fluorescent sensor. We have used these sensors to measure oxygen and thio levels in cells, which can be used to monitor cancer metabolism.